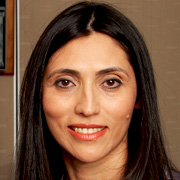 Maryam Rofougaran is a Senior Vice President of Engineering at Broadcom Corporation. She is responsible for development of all wireless radio products, and manages engineers across the world.

Maryam was a pioneer in the design of the first single-chip 900MHz transceiver SOC in digital CMOS. In 1998, she and her brother Reza Rofougaran co-founded Innovent Systems, a fabless wireless semiconductor company that developed Bluetooth technology. Innovent was acquired by Broadcom in 2000. Since the acquisition, Broadcom has developed a new range of wireless applications such as FM, wireless LAN, GPS, NFC, cellular, Femto and microwave backhaul. Broadcom is a market leader in wireless connectivity, and ships ~2 billion wireless radios annually which contribute dramatically to the company’s bottom line.

Maryam has about 200 patents on wireless systems and IC design, and is co-author of more than 35 conference and journal papers. These include the 1995 European Solid-State Circuits Conference “Best Paper Award,” the 1996 International Solid State Circuits Conference “ISSCC Jack Kilby Award” for Outstanding Paper, and the 1997 ISSCC “Jack Raper Award” for Outstanding Technology Direction”

Maryam received a M.S. and B.S. in Electrical Engineering from the University of California, Los Angeles. Maryam was born in Esfahan, Iran.