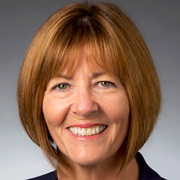 In March 2010, Lynn was awarded HR Executive of the Year by the local affiliate of the NHRA and in 2012 was named one of California’s most powerful and influential women by the California Diversity Council.

Lynn has an MBA in finance and organizational behavior from the University of Toronto, Canada.

Lynn serves on the Board of the Susan G. Komen affiliate in Orange County and is currently President of the Board. In June 2014, she was elected to the Board of Directors for KAR Auction Services, Inc.