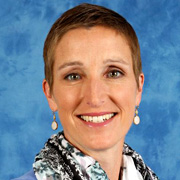 As Head of Human Resources, Laura has worked with senior business leaders to craft a Farmers People Strategy aligned to the company’s overall business goals and objectives. She contributed to the successful rollout of the Farmers Women’s Network and has had responsibility for Engagement, Rewards & Recognition and Strategic Workforce Planning. Laura joined Farmers through the 2009 purchase of 21st Century and led the successful, six-month integration of 21st Century into Farmers.

Laura has over 22 years of human resources experience. Prior to joining Farmers, she held human resources roles at 21st Century and American General, both AIG companies, as well as Franklin Life Insurance Company. She began her career as a benefits consultant with Coopers & Lybrand. Education: B.A., Vanderbilt and M.S.M., The American College