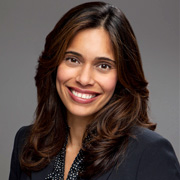 Prior to the Disney ABC Television Group, she was Managing Director, Executive Search Initiatives at Time Warner, Inc. where she was responsible for enhancing Time Warner’s executive brand with diverse communities, and attracting and recruiting diverse executives across the enterprise.

As the Global Head of Diversity and Inclusion and Vice President, Talent Acquisition at Moody’s Corporation she launched and led the company’s first global diversity and inclusion function and concurrently managed Moody’s recruitment in the Americas. Daisy began her twelve-year career at Moody’s as a credit risk analyst covering domestic municipal and global corporate project finance transactions in the transportation sector. As Manager, Philanthropic Programs, she implemented global corporate citizenship programs and strategies.

A passionate supporter for the advancement of women and girls, and diversity and inclusion, Ms. Auger-Domínguez has received numerous national and local honors for her work including a New York City Council Community Involvement Award, El Diario La Prensa’s Latinas Destacadas Award, Time Warner’s Andrew Heiskell Community Service Award, and in 2002 was selected by the U.S. Embassy of Spain as one of fifteen Young Hispanic Leaders. She is a 1998 alum of the Coro Fellowship for Leadership in Public Affairs.

Ms. Auger-Dominguez has presented or moderated at numerous conferences and forums on diversity and inclusion sponsored by such organizations as the Conference Board, the National Association for Multi-Ethnicity in Communications (NAMIC), the Global Organization for Leadership and Development, McKinsey and Mattel.

She serves on the board of the Council of Urban Professionals, the National Association for Multi-Ethnicity in Communication’s (NAMIC) and Promax BDA’s Diversity Roundtables, the FCC Advisory Committee on Diversity in the Digital Age, and as advisor to several professional organizations.

Daisy holds an M.P.A. from the Robert F. Wagner Graduate School of Public Service at NYU and a B.A. from Bucknell University. Born in New York City to parents of Dominican and Puerto Rican descent and raised in the Dominican Republic, she now resides in South Pasadena, CA with her husband and daughter.