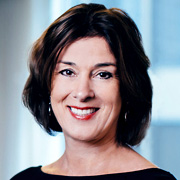 Earlier in her career, Angela established Fox Networks Group’s first in-house recruiting function. Applying the principles of executive search to talent acquisition, she and her team established a department that serviced approximately 9000 employees and recruited at all levels. Angela began as Fox’s vice president, talent acquisition, ultimately being promoted to SVP. She was also involved with the launch of Fox Interactive Media, Hulu.com (JV with NBCU), and six cable channels.

Angela began her search career working at a number of boutique search firms before joining Heidrick & Struggles in the firm’s London office. She eventually transferred to Los Angeles to focus on building the firm’s consumer and entertainment-related business in Southern California.

Angela graduated with a degree in psychology from University College of North Wales. She was a founding Board Member of PromaxBDA’s Diversity Council and a member of the Academy of Television Arts & Sciences and BAFTA.